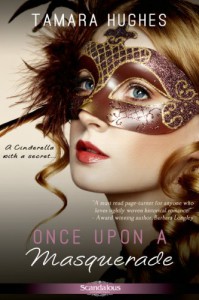 Rebecca Bailey first spots Christopher Black while pretending to be an heiress in a high-society ball. Despite being drawn to the charismatic, self-made shipping magnet, she knows that she’s on a mission: raise the money to pay her father’s gambling debts. And the clock is ticking since she has only a week to come up with five hundred dollars. So she needs to stop thinking about Christopher before she gives away the secret that she’s actually a maid.

Christopher Black notices Rebecca’s naivety and spunk when he first spots her at a masquerade ball. He can’t get his mind off her, though his investigation into the death of a good friend leads him to suspect that Rebecca may be the murderer. Now he must figure out whether he can trust the woman he’s quickly falling in love with and how she fits into his investigation.

This was the first historical romance that I’ve read in a while, and I thoroughly enjoyed it.

The best thing about this novel was the balance of historical details. It’s set in New York in the late 1880′s, and there were enough details to remind me about the setting. But they didn’t overwhelm me either. I especially enjoyed the way that the author wove historic aspects into the story, making them cause difficulties for characters or make parts of the plot possible. This happened numerous times with cumbersome women’s clothing.

As for the characters, Rebecca and Christopher were pretty well matched. Rebecca’s plucky nature made her endearing. She may have been out of her depth stepping into high society, but she still knew who she was. Christopher, likewise, didn’t exactly conform to the upper crust standard since he only recently came into money. But that allowed him to see things differently than those around him.

My only complaint was that the Rebecca’s relationship with her father felt pretty cliche. I predicted pretty accurately how it was going to end. While I understand that there’s a standard with romance novels, I’d hoped that there would have been more tension that gave me doubt about the outcome.

Once Upon A Masquerade would be a great light read for a fan of historic romance set during the late 1800′s.

Once Upon A Masquerade by Tamara Hughes will be published by Entangled Publishing on February 11th, 2014 and will be available as an eBook.

*I received an advanced copy of this book in return for an unbiased review.